Company ‘Grobiņa’ was established in 1960 as a state owned fur production company, and has retained its line of business with specialization in luxury mink fur production throughout the years, giving the company a good reputation in the global fur supply chain industry as one of the most reputable and sustainable boutique mink farms in the former USSR. In 1997 it was reorganized as a Joint Stock Company. From 21.05.2007 stocks of JSC Grobina are listed in stock exchange “Nasdaq Riga”.

The company has carried out serious investment program since 2012 until 2014 building a new production factory and increasing asset value from 5.60 million EUR in 2012 to more than 20 million EUR today, becoming one of the most modern fur production plant in Europe with one of the lowest production costs.

The largest secured creditor of JSC Grobina is Latvian based bank, to which the Mink Manufacturer owes EUR 6 000 000 in total (principal and interest amount covered).

As since 2013 price of fur decreased in the world, the whole industry has hit heavily including JSC Grobina. JSC Grobina implemented a Restructuring Plan, which was officially approved by the court on March 3, 2017 and whose duration is expected to last up to 4 years. Main purpose of the Restructuring Plan is to give leeway and deferral of principal and interest payments to all suppliers and creditors in order for JSC Grobina to properly revive and give an overall sustainable result. On November 4, 2019, JSC Grobina was declared insolvent. The Borrower carries out previously commenced plan to buy out movable and immovable assets of Fur production factory JSC Grobina.

The previously mentioned existing creditor is ready to sell the assets to the Crowdestor’s established SPV - SIA “CR 7” (hereinafter - the Borrower) with a discount. As a security, the Borrower will be the owner over the relevant assets of the JSC Grobina, valued in total at EUR 9 914 900,00, which was calculated by Eiroeksperts SIA, a professional valuer and a member of The European Group of Valuers’ Association (TEGoVA), therefore giving a loan-to-value ratio on all assets an average of approximately 29%.

CROWDESTOR loan will be repaid from profits within 24 months and a part of Crowdestor loan will be refinanced in local bank, as prices has lately started to increase after low prices that has been experienced in in 2014-2019.

Minimum target: EUR 300 000,00.
Maximum target: EUR 750 000,00.
Loan term: 21 months.
Interest rate: 26 % per annum.
Interest payments: paid monthly after the first 12 months. For first 12 month interest payments are capitalized and paid in bullet payment together with the Loan principal payment.
Loan repayment: In full at the end of the Loan Term.
Crowdestor BuyBack fund: Yes.
Collateral: The loan is secured by ownership of the following assets:

FAQ about the Project

Is the Borrower insolvent?

No, The Borrower is NOT insolvent. JSC Grobina, which is the production plant sinc 1960s, is insolvent.

Who is Borrower and who controls it?

The Borrower is new SPV which is 100% owned and controlled by Crowdestor during loan period.

What is the essence of this transaction?

The new SPV buys out assets of JSC Grobina which currently is insolvent. SPV is going to buy out 100% of the assets so day-to-day business can be continued with minimal interruptions.

At the moment SPV has bought out part of assets, all other assets are leased out and buy-out process is progress.

When first fundraising phase was published, the list of assets and valuations were published. So the SPV is buying out exactly the same assets that was mentioned in the first campaign.

Funds raised in next fundraising campaign it is going to be used for exactly the same purpose – to progress with buy-out process.

Why it is financially profitable for JSC Grobina to pay 26% annual interest rate?

The current debt to JSC Grobina from local bank equals to ~ 6 000 000 EUR (interests payments and principal together).

The Fur Industry in general

The Mink Manufacturer is obviously subject to the general trends and specificities of the global international fur market.

While recently various notable fashion houses (such as Versace, Michael Kors, and Gucci) have publicly noted their abandonment of natural fur, the market is still reviving and finding new customers, especially, those representing the rich younger generation. Overall, the major sales markets have shifted from traditional countries to China, Korea, Ukraine, and South America, where perceived standards and values towards animal fur are much different from those usually present in Western countries.

Approximately 85% of all fur sold comes from specialist fur farms, the remaining 15% coming from wild fur animal populations. In light of various international and national laws being adopted globally on an ever-increasing scale towards protection of wildlife, it is reasonable to expect that specialist animal fur farms will become an even more firm player on the market of global fur supply. As a curious example, in 2012/13, the global fur industry was valued at over US$40 billion by PwC (PricewaterhouseCoopers) - roughly the same as the WiFi industry at that point in time.

Most of the world’s farmed fur is produced by European farmers. There are 5,000 fur farms in the EU, all located across 22 countries; these areas of production collectively account for 50% of the global production of farmed fur. Denmark is the leading mink-producing country, accounting for approximately 28% of world production. The United States is a major exporter of fox fur skins. Major export markets include China, Russia, Canada, and the EU. Exports to Asia as a share of total exports grew from 22% in 1998 to 47% in 2002. China is the largest importer of fur pelts in the world and the largest exporter of finished fur products.

The largest Mink fur producing countries in Europe with expected volumes of furs produced in 2019/2020:

Fur farming is banned in Austria, Croatia, the United Kingdom, the Czech Republic (effective in 2019) and Norway. In Germany and Switzerland, the regulations for fur farming are very strict, with the result that there are no fur farms. Some other countries have a ban on fur farming of certain types of animals.

Predominant sources for manufacturers to sell their inventory are the major global auction houses, the largest of these are based in Finland, Denmark, Russia, USA and Canada. JSC Grobina has sold and sells its produce in two of these largest houses: Saga Furs (Finland) and NAFA (Canada). 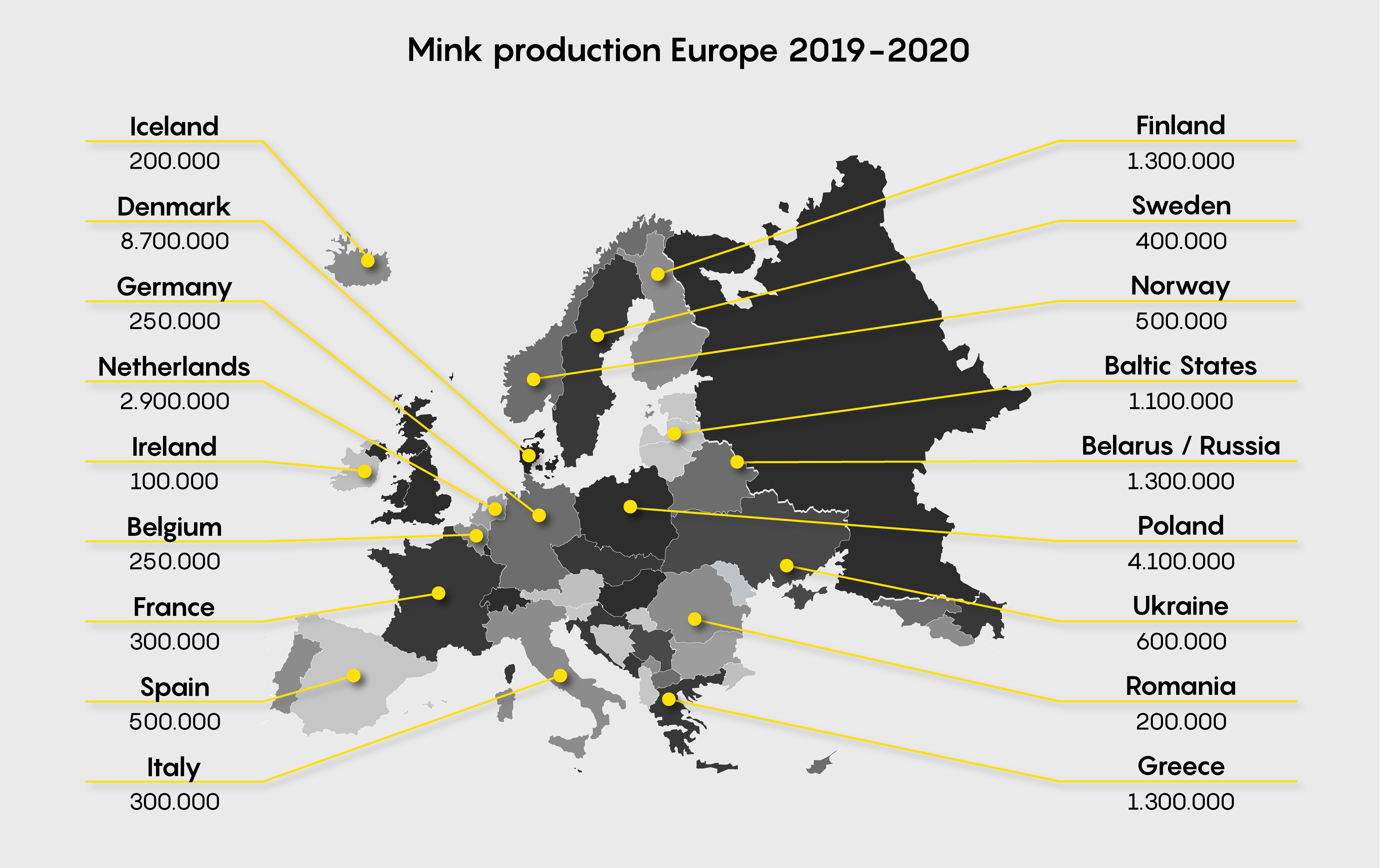 Demand and prices in fur industry

Demand fell in the late 1980s and 1990s because of a number of factors, including the failure of designers to come up with exciting new lines and the efforts of animal rights campaigners. Since the turn of the millennium, however, sales worldwide have soared to record highs, fueled by radically new techniques for working with fur, and a sharp rise in disposable income in China and Russia.

Prices have been fluctuating and going up and down every 5 years, reaching a 35-year historical maximum in in 2013 – 100 EUR per mink fur, declining to 35-year minimum price of 20 EUR per mink skin in 2019. Last international auctions show that demand is going to pass supply and it is expected to reach prices of 35 EUR per mink fur in 2021.

Historical amounts and prices since 1986: 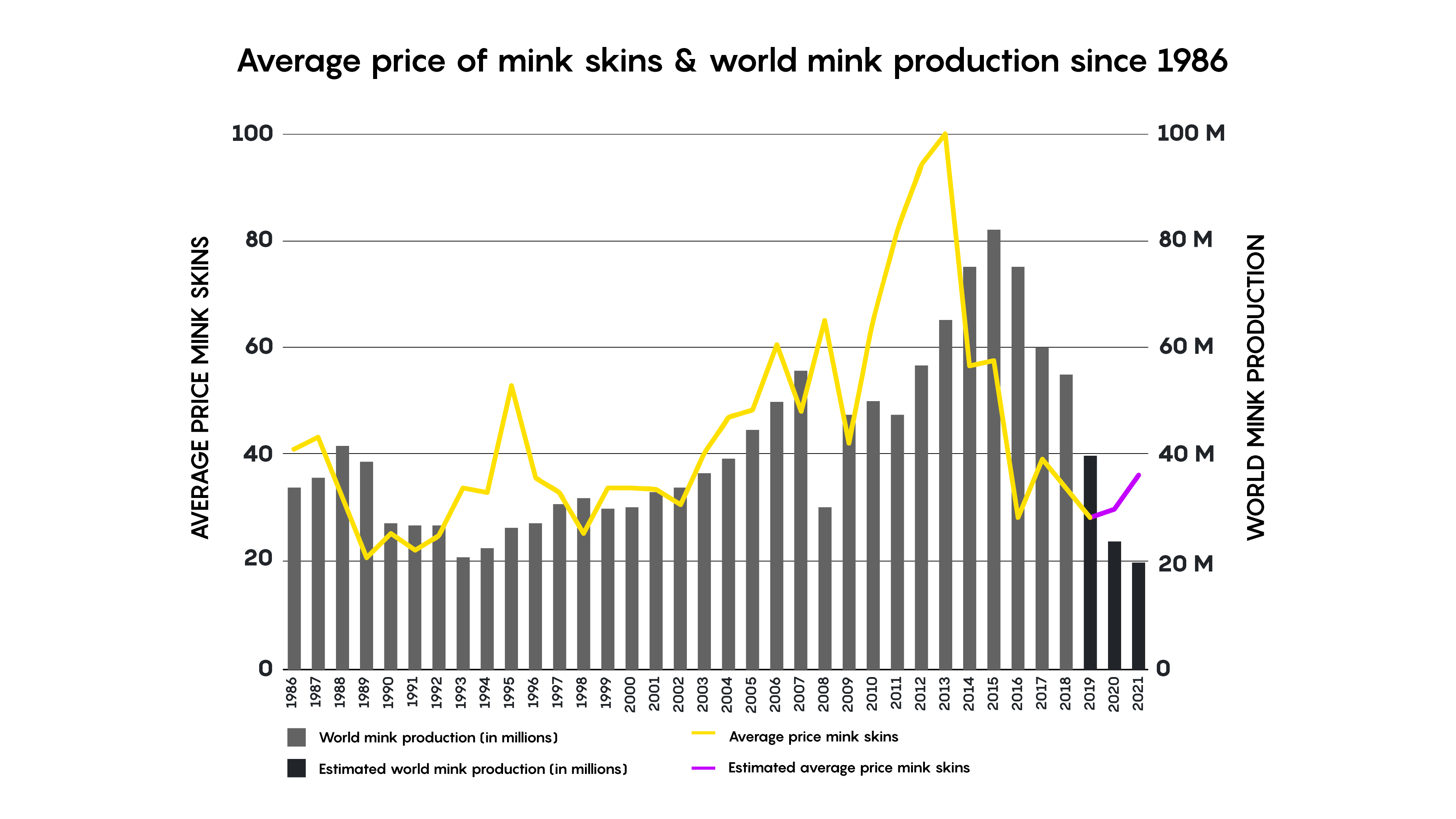 Fur production reportedly impacts the environment negatively through the release of gases, chemicals and fossil fuels.

Some conservationists say that fur farming could have a positive environmental impact, reducing the pressure of wild-animal population growth. According to fur-farming advocates, it relies on sustainable resources which can be recycled. Fur industrialists call their practices agriculturally "green" compared with the production of fake fur, because they are enhancing a natural product instead of creating a new one; faux-fur fibers, produced with non-sustainable resources, have a negative environmental impact.

Fur farming and the manufacture of fake fur both stress the environment. Fur farms use natural fur to create commercial fur products, and fake fur is obtained from other resources. Fur farms implement sustainable, efficient operating practices to mature minks, raccoons and foxes, using animal waste as additional fuel to power the farm and biogas plants which process poultry and manure. Energy used to create animal feed is partially used to create more energy, creating a positive feedback loop. A 1979 University of Michigan study found that despite the environmental cost of fake fur, however, a farmed-fur coat requires 20 times more energy. The manufacture of fake fur requires petrochemicals (a finite resource), and the acrylic nature of fake fur requires a longer processing time than natural fur before it is ready for commercial use.

Company ‘Grobiņa’ was established in 1960 as a state owned fur production company, and has retained its line of business with specialization in luxury mink fur production throughout the years, giving the company a good reputation in the global fur supply chain industry as one of the most reputable and sustainable boutique mink farms in the former USSR. In 1997 it was reorganized as a Joint Stock Company. From 21.05.2007 JSC Grobina is listed in stock exchange “Nasdaq Riga”, in Baltic Secondary List Market.

Fur farming business now at the company was organized through 2 distinctly kept farms – the old factory and the new factory, both operating and maintained under the same level of highest quality standards, which are commonly practiced in the international fur manufacturing industry and to which the Mink Manufacturer has voluntarily agreed to adhere to.

The company has carried out serios investment program since 2012 until 2014 building a new production factory and increasing asset value from 5.60 million EUR in 2012 to more than 20 million EUR today, becoming one of the most modern fur production plant in Europe with one of the lowest production costs.

In 2014 prices for mink fur decreased in market however production costs decreased slower resulting in annual turnover of 2.88 million EUR and negative EBITDA of -1.18 million EUR.

Accumulated EBITDA in year 2015, 2016, 2017 and 2018 is positive in amount of 1.67 million EUR, an average annual EBITDA of 0.42 million EUR however financial results are still behind expectations. The average EBITDA is targeted to be above 2.5 million EUR and 3.0 million EUR respectively with mink prices increasing to 25 EUR per skin and 30 EUR per skin by end of 2021 and 2022.

Due to significant drop of purchase prices in years 2014 through 2016, which was imediately after investment program was carried out, JSC Grobina was suddenly unable to meet its short-term debt on a significant scale for a foreseeable future. As a consequence, the JSC Grobina proactively filed for a legal protection and entered into good faith negotiations with largest suppliers and creditors, soon ultimately reaching a successful settlement, which ended into a court approved Restructuring Plan.
Main purpose of the Restructuring Plan is to give leeway and deferral of principal and interest payments to all suppliers and creditors in order for JSC Grobina to properly revive and give an overall better sustainable result by end of 2020. More information in available in annex - Legal protection proceedings plan of action. 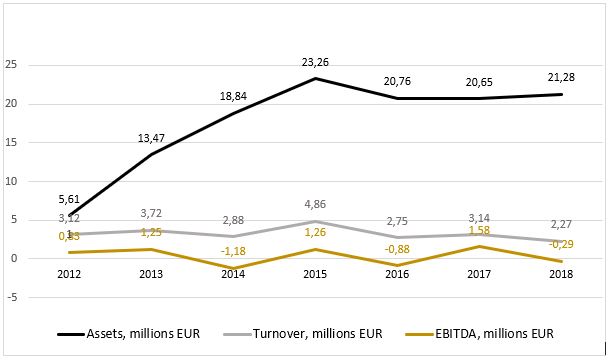 Production costs in JSC Grobina factory was around 17 EUR per 1 mink fur which is under average comparing to prices in other EU countries: 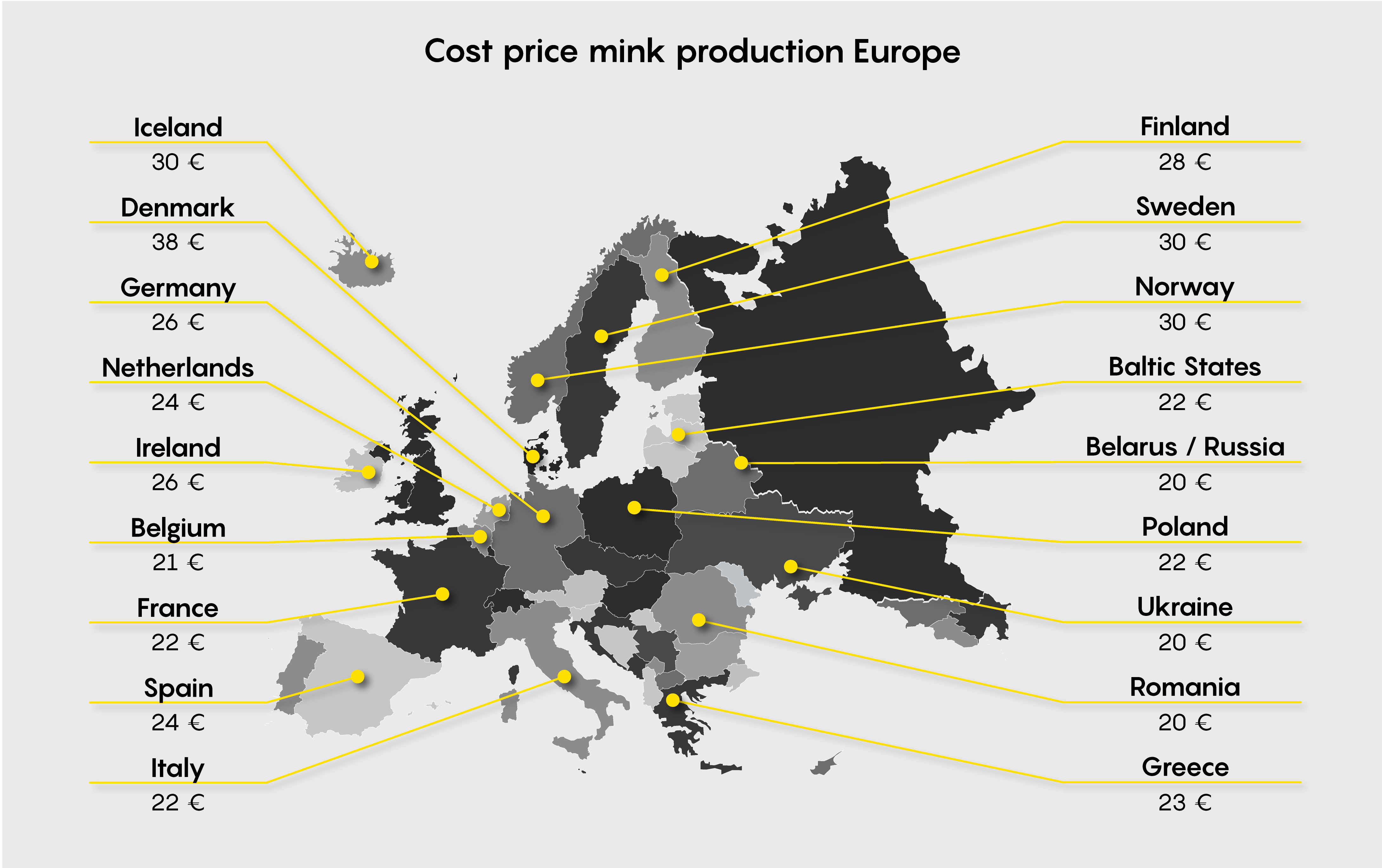