Investing & Crisis. How to Act?

How to act during the Force Major situation: sell and go away, or stay, invest in distressed assets, and come out a winner when the economy bounces back? Read CROWDESTOR’s take on why “Crisis is an Opportunity”.

To become rich thanks to investing requires a lot of knowledge, effort, time, and capital. Also, it is a matter of luck to be at the right moment in the right place. The investor needs to know more than others (knowledge asymmetry), to spend time researching the best investment opportunities and wait patiently for assets to increase in value. Crisis, on the other hand, is a “short cut” to earning a premium return, since the prices for many assets are below market price. What to do to benefit from the downturn of the economy?

The current year is challenging for the majority of businesses and populations around the globe. Crises have happened throughout history and the economy has always bounced back. However, the current economic downturn is caused by the outbreak of COVID-19 is an unprecedented event globally.

Unlike the previous crisis (the Great Recession of 2008-2009) the current one is not caused by the economic or financial fundamentals, but by the “Great Lockdown”. Due to the forced closure of businesses and “stay home” policies around the globe, the overall demand has dropped significantly.

Therefore, since there is no precedent and no modus operandi for the health induced economic downturn in modern history, the measures taken should be adapted continuously.

However, what was experienced before and what history has shown, is the economy always recovers and grows further. The recession is temporary.

Despite the crisis being caused by external factors rather than underlying financial reasons, the fall of quarterly GDP is the largest ever recorded in the OECD countries1. The second-quarter GDP has shrunk by 9.8% in 2020, while in 2009 the quarterly GDP fell “only” 2.3%. The countries with stricter lockdowns have suffered more, like UK (-20%), and France (-13.8%).

In March 2020, the world has been shocked by the travel bans and widespread lockdowns. Everyone, not alone, investors started panicking. The future looked uncertain, and many people have lost their jobs. Many investors influenced by widespread panic have sold their assets and preferred an early exit plan.

This was understandable at the time since no one knew how long the lockdowns will last and what the economy will look like in the coming quarters. Now, despite the “second wave” of the coronavirus infections and the return of the lockdown in some counties, there is no panic. Now, we know that in 2021 we will have a vaccine, and thanks to rapid digital transformation the business can be done remotely. Hence, people are looking into the future with more confidence than in March 2020.

The past months have shown that flexibility is vital not only for personal lives but also for businesses. Many landlords have reduced or postponed rent payments, banks allowed to take “credit holidays”, businesses have received governmental support.

The basic instinct- fear has kicked in during the unfolding of the crisis.

The S&P 500 index representing the largest companies traded on U.S. exchanges have fallen on March 23rd to its lowest point in three years, losing 34% when comparing to February 20202. The equities have lost their values due to panic. Those investors who knew that the fundamentals are strong were on a buying spree, instead of divesting. Those who invested during the stock market downturn have gained 60% by September 2020, when the S&P500 has reached the highest value it has ever had before.

The same is true for the oil price, which has rebounded mid-summer 2020 (around $40) after its shocking fall in April 2020 ($20). While some assets are back or even above to pre-COVID price, there are still hidden opportunities. The stock and commodity exchanges are not efficient, and the price is not always an indicator of the real value of the asset. So, it is essential to search for the hidden mispriced gems. While the most common assets’ prices (like stocks and oil) have recovered, some still are about to, depending on the specifics of the market.

It is hard to search for such assets if you do not possess expert knowledge. CROWDESTOR has done the homework for you, and we are pleased to offer an opportunity to invest in underpriced commodities. The aim is to acquire specific commodities under 50-70% of market value with a future sale. The investment opportunity offers not only the fixed yield but also the variable profit sharing potential, depending on the future sale price.

Cambodia Projects- When the Whole World Stays at Home

COVID-19 has brought damages to the whole economy, but no other industry has been hit as hard as tourism. The World Tourism Organization UNWTO said on 15th of September that the number of tourists has fallen 93% in June when compared to 2019 and 65% during the first six months of 2020. The loss of international tourism has amounted to $460Bn, which five times higher than losses caused by the previous crisis in 2009.

When CROWDESTOR decided to place the Cambodian hospitality projects for crowdfunding, it seemed like an investment opportunity with great return potential. It still would be, as the fundamentals are very strong. Cambodia has experienced strong economic growth over the last decade; GDP grew at an average annual rate of over 8% between 2000 and 2010 and about 7% since 2011 with tourism being one of the drivers of such growth. Tourism has continued to grow rapidly with foreign arrivals exceeding 2 million per year in 2007 and reaching 5.6 million visitors in 2017.

Around 500,000 Cambodians are employed in the tourism sector (total population is 16.25 Mln). More than 50% of the population is less than 25 years old. In 2006, Cambodia's tourism sector generated a revenue of US$1.594 billion, which made up approximately 16% of the country's GDP. In 2018 Cambodia experienced the third-largest increase in international tourists in the ASEA region, behind only Vietnam and Indonesia. In the year 2018, the number of international tourists visiting the Kingdom grew by 10.7%, a rate surpassed only by Indonesia (11.6%), and Vietnam (19.9%). 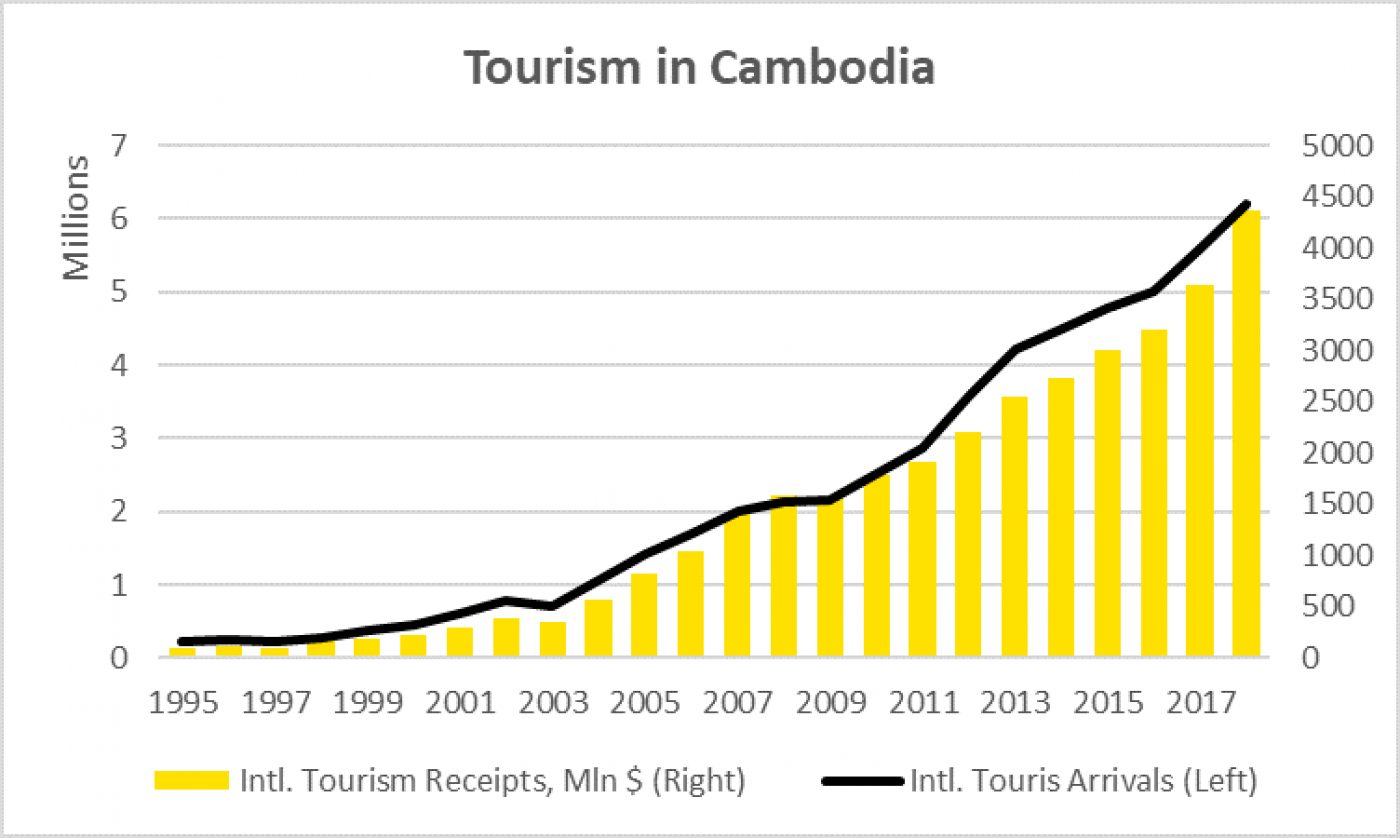 Because of the lockdowns in Asia which started in January 2020, the global lockdowns which followed in March (the high season), and Chinese tourists accounting for 38% of all international tourists, the Cambodian tourism industry has started to feel the pain sooner than in Europe. Right now, the tourism industry is slowly reopening. However, the government now requires a $3000 deposit per tourist to safeguard the country against the possibility of tourists getting sick with COVID-19. This deposit would cover health-related costs. Of course, such requirement is not appealing to tourists and the rebound is not happening yet.

The tourism sector in Cambodia is basically closed now. However, this is another example of the underpriced asset. For the reasons listed above the prices for tourism, objects are much below the “pre-COVID” level, so we are exploring new investment opportunities into the hospitality industry in Cambodia. CROWDESTOR’s competitive advantage is the knowledge we have gained during the previous crowdfunding campaigns in Cambodia. We already in the negotiation of financing the hospitality projects of up to 75% below market value. This is another example of the mispriced asset during a crisis.

The crisis is an opportunity they say, but what exactly it means? In our opinion, it means to take a deep breath and think clearly- how to make additional profit by exploiting the falling prices.

CROWDESTOR believes in strong growth potential after the world will recover from the devastating effects of the pandemic. We invite our investors to think outside the box about how to benefit now, as crises luckily do not happen often.

Back to posts
We use cookies to ensure that we give you the best experience on our website. If you continue to use this site we will assume that you are happy with it.
Read more
Login / Register