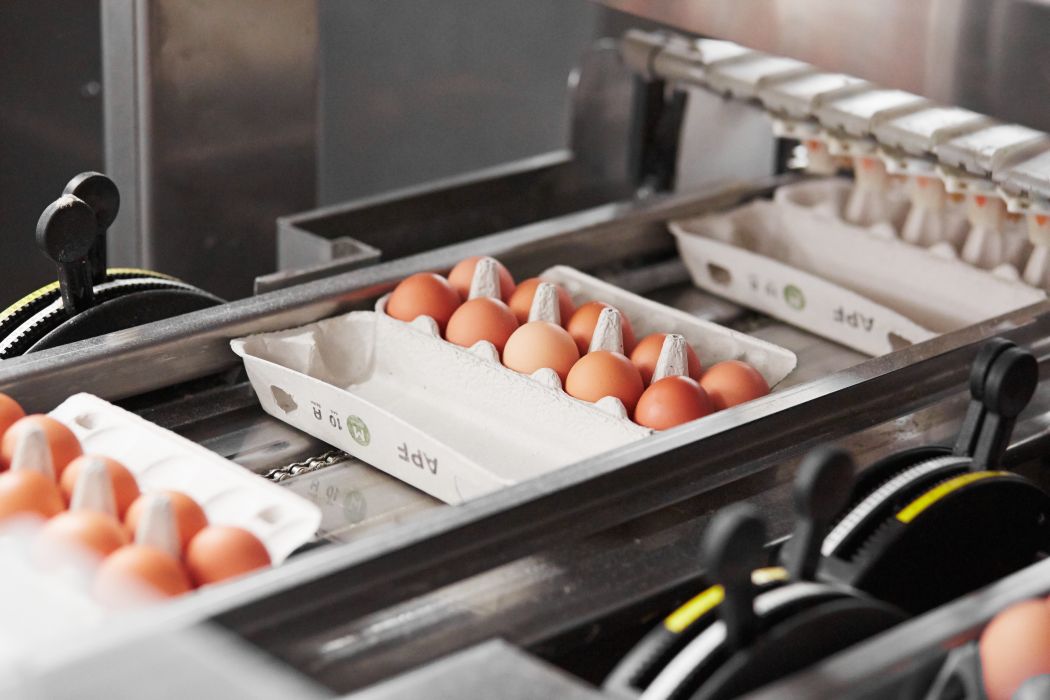 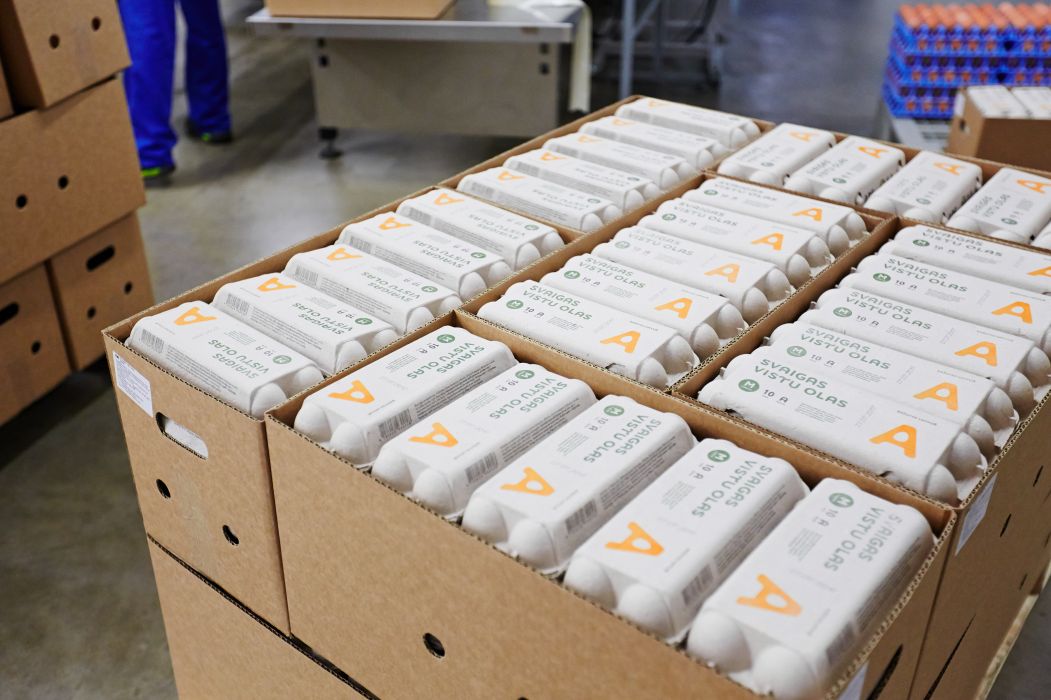 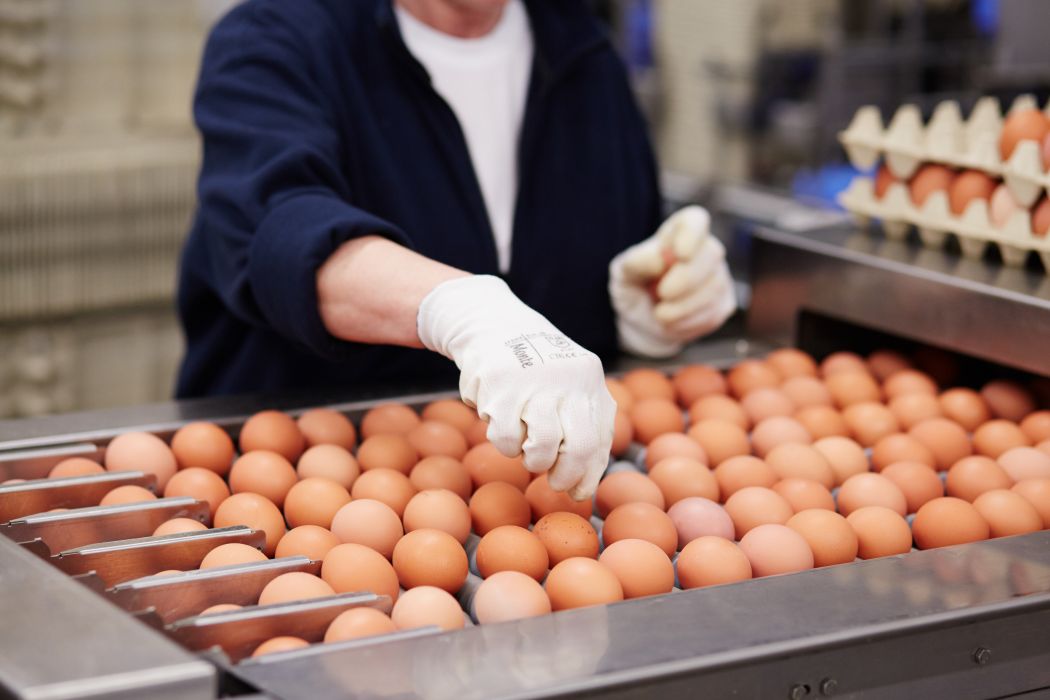 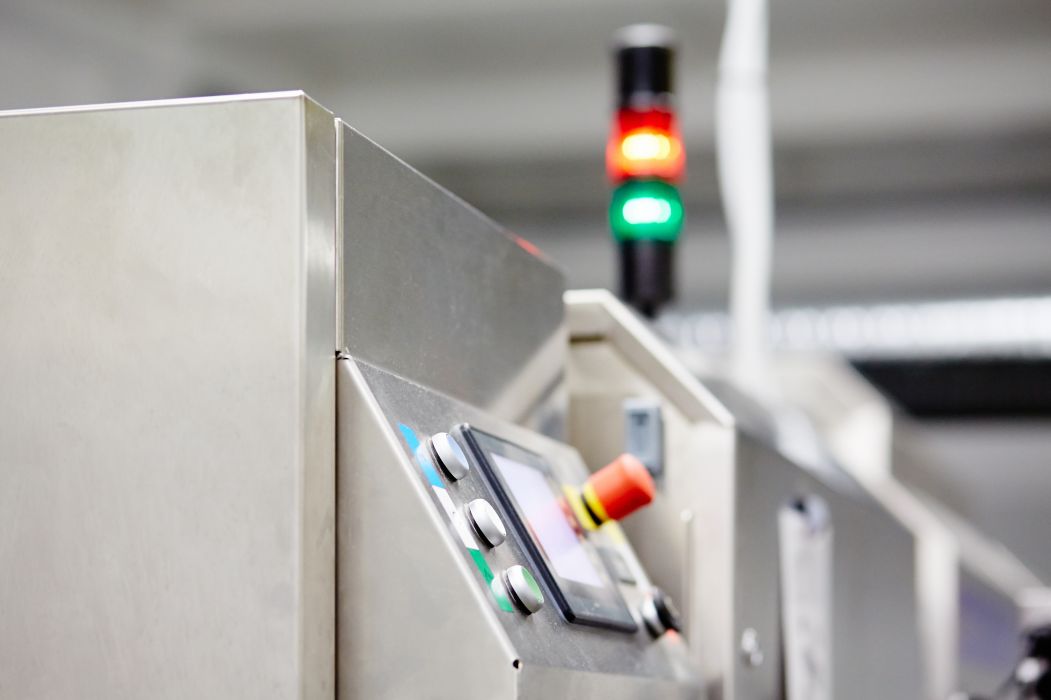 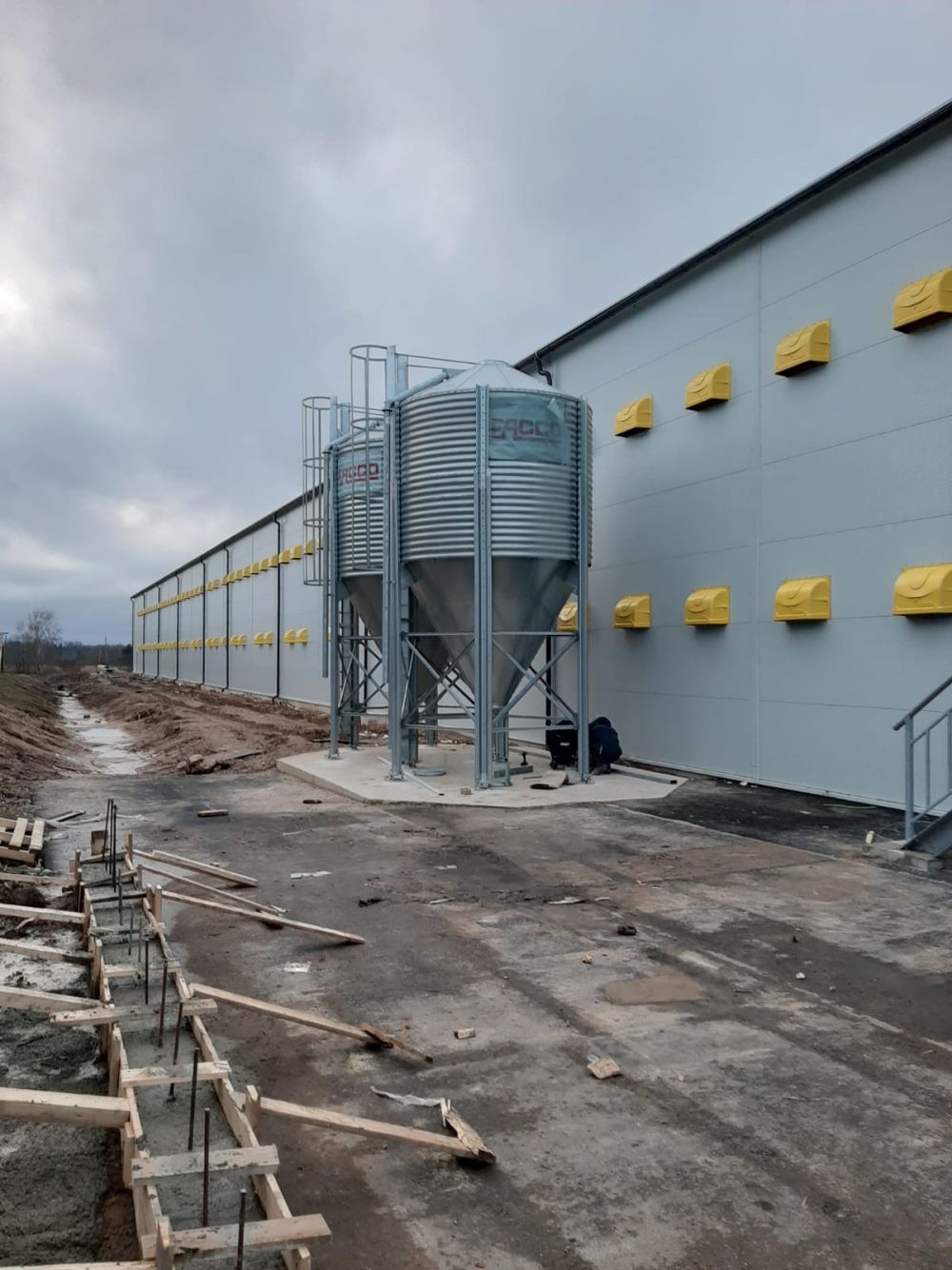 APF is the country's second-largest producer of chicken eggs in Latvia, with a history of production since 1961. The company has accumulated a great deal of practical experience and as of now produces eggs for general consumption in the Baltic States and European Union countries, having established export client base in 10+ countries.

The company is undergoing a serious investment program since 2014 in order to comply with strict and newly adopted European Union animal welfare standards. The company has stopped the “old-fashioned” methods of production in 2012 and during the first investment phase has completely modernized it production facilities and re-started the operation in 2017 with the 1st new Chicken Barn allowing to produce around 45 million Eggs per annum.

In summer of 2019 APF started the second investment stage. As of today APF finished the construction of 2nd Chicken Barn which has been fully commissioned in December 2019. Assembly of equipment is at its final stage and due to be completed in February 2020. State of the art equipment is purchased from FACCO, world’s leading manufacturer of poultry equipment (https://www.facco.net). During March 2020, the new barn will be populated with a young flock of 130,000 chicken.

The amount of total investments in the production site has reached EUR 10 200 000 by the end of 2019. First modernization phase was financed by the Shareholder loan, European Commission subsidy and JSC “Development Finance Institution Altum” (Altum). Reaching the maximum allowed financing limit for SME’s in Altum, the current, second investment phase is being financed by Shareholder loan, European Commission subsidy and a pool of private investors.

APF is planning to refinance the Altum and private investors loans with a strategic financial institution loan in a short to medium term. In order to launch operations of the 2nd Barn, the Company need to rise funds to finance acquisition of the first Chicken flock for the 2nd Barn and associated Working Capital increase. The contract for the rearing of Chicken Layers is signed with the rearing farm in Poland (Aktiw Sp.z.o.o.) specialized in rearing of German well known and most popular Chicken cross – Lohmann. The advance payment is already made. The outstanding amount of the contract is EUR 500 000 and another EUR 100 000 are needed for Working Capital financing (purchase of feed ingridients).

CROWDESTOR loan will be repaid from profits of 2nd Barn Chicken flock operations during productive cycle (15 months) and proceeds of its sell by the end of productive cycle.

Minimum target: EUR 100 000
Maximum target: EUR 150 000
Loan term: 15 months
Interest rate: 15% p.a.
Interest payments: paid monthly after the first 3 months required for rearing of Chicken Flock and start of Egg Laying. For first 3 months interest payments are capitalized and paid in bullet payment together with the Loan principal payment.
Loan repayment: In full at the end of the Loan Term
Crowdestor BuyBack fund: Yes
Collateral: The loan is secured by the pledge of the following assets:

Aluksne Poultry Farm, with a production history dating back to 1961, is located in Aluksne region of Latvia, 15 km from highway E77 "Pskov-Riga-Budapest". The site secures complete production cycle starting from purchase and breeding of chicken, production of compound feed, keeping of laying chicken, collecting, sorting and storage of eggs.

Existing investments made till 2017 allow to triple egg production without significant additional investments into supplementary facilities already built during 1st phase. Therefore it is essential to construct additional hen barns, not only to utilize economy of scale of current facilities, but also to eliminate existing gaps in cash flow during the replacement of Chicken Flock in single operating 1st Chicken Barn and maintaining smooth earnings.

Construction of modern 2nd and 3rd Barns will allow entering the new profitable and high-demand market of Barn egg production (No. 2 eggs) that have additional price premium. After APF announced its plans to produce barn eggs, it has received offers to cooperate with such large retail chains as «Rimi» and «Maxima».

Since 1957 Luigi Finco outlined a scientific vision for OFFICINE FACCO Research & Innovation Technology. Facco has always believed that quality can only be guaranteed by a highly industrialized and efficient manufacturing process. During this 60 years of experience Facco has steadily invested in R&D, and today is the most innovative and environmentally compatible among the manufacturers within the industry. Facco equipment is presented in a majority of egg producing countries around the World. APF 2nd Barn fitted with the world leading Facco equipment will be the first and the most modern Barn in the Baltics region.

Due to the recent public awareness of the animal welfare health issues and following Scandinavian countries experience, large retail chains in Latvia has announced its plans to sell only eggs produced by “Barn” method starting from 2025. As of today, Latvia produces eggs only by “Cage” method which means that in nearest future Latvian producers would need to bear significant Capital expenses to totally replace the existing facilities or sell the “Cage” eggs outside Latvia. APF is in favorable position as it will be the first producer in Latvia to introduce modern “Barn” method egg production facility and will do so in a way of expanding its production capacity, but not replacing the existing, not yet fully utilized facilities.

APF production facility is located in the North part of Latvia – very close to the Scandinavian countries that are large egg consumers with the highest egg price and “Barn” egg share.

Upon completion of investment program, APF is planning to reach a capacity of around 500K laying hens which is treated as optimal and desirable production capacity by European Commission officers in term of biosecurity and production stability, what places it in a better long-term situation comparing to large competitors.

As a competitive company, being the second largest national producer of hen eggs, with production history dating back to 1961, APF have accumulated a large practical experience. In order to satisfy the demand and quality requirements for local product on its way to consumers, the production facilities of the APF have been upgraded after 2012, as part of modernization of the poultry housing and egg production complex, by introducing brand new modern production lines developed by leading manufacturers from Spain, Germany and the Netherlands.

While APF business is primarily targeted at local purchasers, and specifically at families in the Baltic States for whom the local origin and quality of food products is an important aspect, thanks to our ability to ensure stable production rates and supplies, and the fact that the quality of Latvian products is highly appreciated outside Latvia too, about 25 per cent of our products are exported to other EU countries.

During the investment phases being successfully realized since 2014, APF is working with negative Free Cash Flow being financed from Shareholder loan, European Commission subsidy and JSC “Development Finance Institution Altum”. Having so far only one operating Barn and single Laying Hen flock, APF forced to constantly face the production gaps between the Hen Flock laying cycles when no eggs are produced and company bears only expenses, that are preventing the company from reaching positive financial results so far.

As all of the Agriculture companies involved in livestock business APF main expense position are Feed expenses and Labor expenses which are at the industry’s benchmark level. Other noticeable expenses are packaging and delivery (as eggs are mainly sold to retailers).

APF has developed the Client’s chain of around 60 Latvian small to medium retail chains which utilized almost 100% of M and L sized egg produced by APF and suitable for retail so far. The rest of the eggs produced (S and XL sizes as well as second grade eggs) are being realized to large European egg resellers and egg processors for making of egg products. After APF announced its plans to produce barn eggs, it has received offers to cooperate with such large retail chains as «Rimi» and «Maxima», which can utilize 100% of all 2nd and 3rd barn eggs produced and suitable for retail.

Upon completion of the investment programme and launching new 2nd and 3rd Barns APF will almost triple its current production facilities and will rise its profitability margins by selling premium products of Barn produced eggs.

Historically the most popular way of producing eggs is “in-cage” method (Chickens are kept in cages producing so-called No.3 eggs). This method ensures most efficient production and biosecurity of the Layers.

Currently it is broadly used to produce eggs using “cage-free” or “Barn” method (Chickens are kept in open cages, allowing mowing inside the Barn, producing so-called No.2 eggs). This method requires higher investments in production facilities, but gives Chickens larger space for movements, which positively influence its health and appearance.

Thanks to the recent public companies, the demand for No.2 (Barn) eggs is also growing in Latvia. Respectively the customers demonstrate the readiness to pay for the No.2 eggs extra premium.

After 1.3 years of production it is necessary to replace old Layers with new ones, as production below 0.7 egg per day becomes unprofitable. Moreover, it is mandatory to keep in each Barn Layers of the same age due to the biosecurity issues, and to control the size of the eggs. After their lifespan of 1.3 years the chicken flock has to be fully removed and Barn sterilized, which takes approximately 2 months. During this time period, working with single Barn (as it has been until now), the company cannot generate revenues and only bear costs during this period that create gaps in cash flows.

CEO and CFO have previous experience in banking and asset management. They were leading the Baltic Restructuring Directorate of Reverta with AUM in excess of EUR 1 billion.

For the past three years, they have scrupulously studied and learned the ins and outs of Chicken egg production. Facility operations teams are run by seasoned veterinary and production professionals.

Among other products of natural origin Eggs have extremely high quality standards which starts with strict requirements of Layers Welfare and Biosecurity. This is why one of the greenest regions of Latvia, far from other layers and poultry farms, largely populated centres and production areas, has become the most grateful environment for successful development of Aluksnes Putnu Ferma.

APF started to operate after the modernization project only in March 2017. However, during this short period APF group of companies and its products have gained significant recognition from Latvian customers and retailers for exceptional quality and innocent business reputation, which resulted in winning of the “Product of the Year 2018” reward by APF.

There are more than 400 million laying hens in the EU. The laying hens produce close to 7.5 million tonnes of eggs each year and production is growing by some 2.5% every year driven by the growing egg consumption in the world, which is explainable by the growth in world population and eggs being the easiest and richest source of protein. About 50% of Eggs produced in EU are produced by Caged method and about 30% are Barn method produced, while in Latvia just 10% of Eggs have been produced by Barn method so far. Latvia is traditionally Eggs exporting country with over 50% of produced Eggs being exported to other countries. Similarly, the Europe is Net Egg exporter, while export volumes reaches only 4% of total production.

Eggs are irreplaceable product in a human diet therefore there is a sustainable demand for eggs in every place in the world.